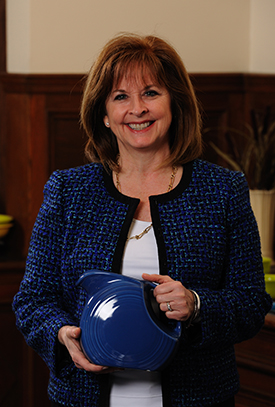 President and CEO of the Fiesta Tableware Company

Liz was born in Newell, WV with slip (liquid clay) in her veins. A member of the 4th generation of the Wells family to own and operate The Homer Laughlin China Company, now known as The Fiesta Tableware Company, Liz joined the company shortly after graduating from Bethany College. She held various supervisory roles in the plant, culminating as Superintendent of the hotel division plant before taking a break from her professional life to raise her three daughters, two of whom now work for the company. Liz rejoined the company in 2007 as a Vice President and became the first female leader of the company when she became President and CEO in 2013, succeeding her brother in the role. Under Liz’s leadership, The Fiesta Tableware Company and the iconic Fiesta® brand has flourished, celebrating the 150th anniversary of the company and 85th anniversary of the Fiesta® brand in 2021.